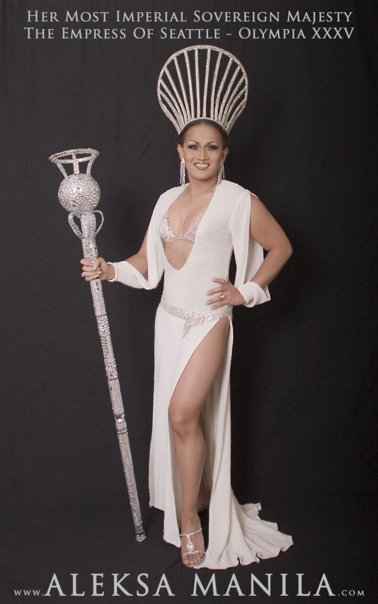 ALEKSA MANILA (S/he/Siya pronouns)
HISM Olympia XXXV, ALEKSA MANILA is the 35th elected Empress of the Imperial Sovereign Court of Seattle, the Olympic and Rainier Empire. Dubbed, "The Pearl of the Pacific and Orient Seas, The Thrilla from Manila," she reigned with HISM Rainier XXXII Larry Steward Ryan in 2006 and 2007. She has been a committed member, both general, board and titleholder with ISCSORE for almost two decades in her home court of the Emerald City. She is also Miss Gay Seattle XL (2004-2005), believed to be the oldest drag title West of the Mississippi.
As a proud FilipinX immigrant and genderqueer individual from the Asia Pacific region, she brings with her social justice lens and human rights activism to raise the visibility and voice of minority populations. Her first title is Miss Gay Filipino 2001 (Filipino Community of Seattle) where she focused on the senior and elders, and intersections of the LGBTQ+ groups with the API/Filipino-American communities.
Aleksa Manila is Seattle's sweetheart of social activism and philanthropy. She has produced numerous fundraisers and benefits for LGBTQ+ and social service organizations like ICON (Seattle Counseling Service), Gay Bingo (Lifelong), Aleksa Manila & FRIENDS (Pride ASIA), Saying It Out Loud Conference (Health Care Authority) and so on. She is a sought-after speaker, presenter, facilitator, moderator and trainer on the subjects of sexual minorities, cultural competency and clinical consultations from students to doctors. Aleksa is a beloved staple in diverse family communities with her "Drag Queen Storytime with Aleksa Manila" working collaboratively with Seattle Public Library, Wing Luke Museum, Northwest Folklife Festival, International Children's Festival, Seattle Pridefest and so on; where she highlights stories that celebrate diversity.
In 2012, she founded Pride ASIA, whose mission is to celebrate, empower and nurture the multicultural diversity of the LGBTQ+ communities through the Asian Pacific Islander lens. (www.prideasia.org)
She has been recognized throughout the years from the Jose Honors (2006), Sainted by the Sisters of Perpetual Indulgence (2009), Seattle Pride Grand Marshal (2014), GSBA Humanitarian Award for Community Leadership (2018), Seattle Mayor's Pride Award for Outstanding Leader (2018), Seatle Women's Pride Community Champion (2018), Filipino Community of Seattle Lifetime Achievement Award in Community Leadership (2019), and QLaw President's Award (2020) to name a few.
Mx. Manila's professional background includes being licensed social worker with a Master of Social Work degree from the University of Washington with an Integrated/ Mental Health concentration, licensed addictions professional in the State of Washington and works for King County - Public Health in Seattle, Washington. She is also a clinical consultant with a private practice based in Seattle's Chinatown/ International District. (www.amclinicalservices.com)
Aleksa is honored to return to the International Court Council as Heir Apparent Emeritus to HISM Empress Nicole The Great de San Diego, Queen Mother of the Americas; and serve as liaison and an ambassador of goodwill.
To learn more about her journey, visit www.ALEKSAMANILA.com and on all social media platforms via @aleksamanila.
She can be contacted via court@aleksamanila.com
Maraming salamat po! (Thank you very much!)