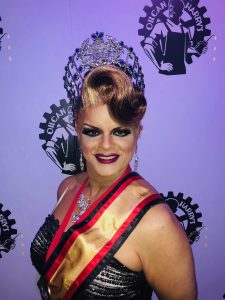 I Ivan Cuadrado aka: Emeralda Kane Jaymes began my career as a female illusionist twenty years ago in Washington DC area. I started to compete for bar titles and always got first runner up. Until one day I finally won Miss Omega 1999. After that I became well known throughout the drag community. I than decided to join The Washington Academy, a social organization that allowed drag queens to express themselves and fundraise for the Washington community. At the time I also joined ASGRA (Atlantic State Gay Rodeo Association) during my membership with both organizations, decided to run for the title of Miss Gaye America DC 2007 were I won the title. After one year of holding the title, I also decided to become Miss ASGRA 2008.

After so many years in the Washington DC area I moved to San Antonio Texas with my partner of now 18 years. I still wanted to help the community and decided to join The Alamo Empire in 2010. During investiture for reign 19 I was honored with the title of Princess of the Hemisphere. The current Empress at the time saw my passion and elevated me to her ICP (Imperial Crown Princess) to Reign 19.  I decided to put my name for Regent Empress XX in 2011 and was approved by the Board of Directors and College of Monarchs. After stepping down as Empress 20. I have continued supporting the community of San Antonio, The United Courts of Texas and the ICS.

While continuing to support my community I have been Vice President of the Board of Directors, member of other organizations to represent the Alamo Empire and held many honored titles (Queen Mother, Half Empress, Recipient of the Royal order of Jose 1 and so on) After 4 years of supporting my community and all throughout the ICS, my community and The Alamo Empire needed an Empress for reign 24. I decided to run for the title; at for that time I had to campaign for it un opposed. As many of you know there is a no vote; but out of 236 votes I received 211 votes. I than became the 24th elected empress of the San Antonio Community. During this reign my Emperor and I had everyone adopting our reign theme Unity for the Community even other organization adopted it while we reigned.

This brings me to date, I am currently the President of Board of Directors for The Alamo Empire. I have tried to direct our organization to a positive outlook with good success. During this time, we have updated our bylaws and PnP’s to reflect our need to day. I am also continuing to mentor our members and our community.

I believe in the court system for what it stands for; and that is helping does in need and teaching safe sex practices among respecting yourselves. I think we as a community need to stand together no matter if you are gay, straight, bi, black, white, Hispanic, transgender or whatever. We need to support each other no matter what is thrown at us; and this is why I do what I do.

No matter what the future holds for me, I will continue to support my community and the ICS. This is my passion in giving back to those who have supported me throughout my career and personal life (the community).

I submit this bio to you as a short story of my life as a community member and my work that I have done throughout my years as an entertainer and fund raiser for the community, that being in Texas or DC. Even dough I have accomplish many things I truly believe that I did not do it by myself. I have the support of my husband, family, friends and for most my community.