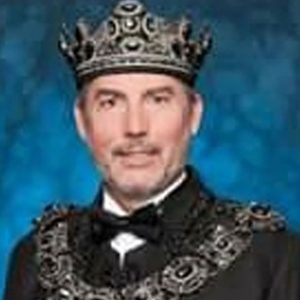 My involvement with the International Court System began in the beautiful City of Destiny, Tacoma, WA. Since joining the Court of Tacoma, I have served on the Board of Directors both as a director and as President. Later, I was honored to be elected by the local community to serve as Emperor 32. Most recently, I was chosen by my fellow monarchs to serve as Dean of the College of Monarchs.

Prior to my involvement in the Court, I have been a long-time member of the Leather community, not only here in Tacoma but elsewhere. I served as Southwest Leather Sir, 2008. I am a member of Mama Sandy Reinhardt’s family as Mama’s Caballero. I am a founding member of the South Sound Leather Alliance. For the past several years, I have been invited to speak at numerous workshops and conferences in the U.S. and Canada on various aspects of the Leather lifestyle.

In my professional life, I have served in the U.S. Army, both as an enlisted soldier and a commissioned officer. I earned my B.A. in history from California State University, Sacramento and a Master’s of Divinity from Duke University. My work experience includes college instructor, working for the Bureau of Prisons, and an independent business owner and member of the local Hispanic Chamber of Commerce.