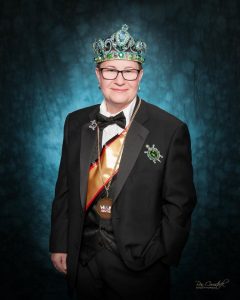 Her Most Imperial Majesty, Dustin D Cobwebs joined the Imperial Sovereign Court Of CT in 2010.  Gradually making a name for herself by implementing and co-hosting an annual event (Misfit Toys) which helped raise money for charity while also gathering toys for a local children and family’s shelter.

Dustin has served on the board as a general Member at Large, and Vice President as well as the position of Minister of Protocol.  Dustin had the honor of servicing as Imperial Crown Prince to Reign 2014 before her election to Emperor to Reign 2015.  She holds the distinct honor and privilege to be elected the first biological female Monarch of the Imperial Sovereign Court of CT.   With an unstoppable Empress and revved up membership, it was a year filled with innovative ideas and was beyond successful.

Dustin has been an active participant in raising awareness for women’s issues within the ICS.  This includes her involvement in the women’s conferences held in Cincinnati and Hamilton in addition to hosting the conference in Connecticut.  Dustin was instrumental in the creation of the ICS Women’s Group which is a safe space for all women (biological and those who identify as) to share ideas and concerns among sisters.  Currently the group boasts 130 active members and growing.

Dustin is honored to be joining the Council and is excited to work with the other members for the greater good for both our members and the community.