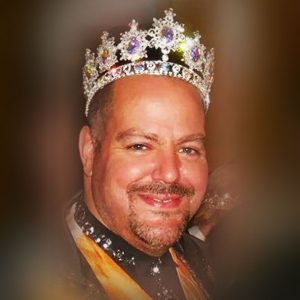 JD began serving in his community of Fort Worth, Texas over ten years ago simply trying to make a difference were he could and learn about the opportunities to serve and the needs of his community. After learning more about the Imperial Court de’ Fort Worth Arlington he and his beloved husband found their niche and continued to work away helping the community raise money for those in need one dollar at a time.

After several years of being actively involved in the Court, JD was honored to be elected the 35th Emperor of the Imperial Court de Fort Worth Arlington as the Citrus and Silver, It’s better with a "swish", Dragonfly Emperor. During his reign he was able to expand his circle of friends and gain a better understanding of the huge impact that this amazing organization has on so many communities, organizations and individuals alike.

JD, along with his Empress (who happens to be his husband) created the Marianna Taylor Scholarship fund for local LGBTQ supporters to further their education. As we know, the future is dependent on continuing to raise awareness of those in need and volunteerism opportunities in our communities.

JD is honored for the opportunity to serve on the International Court Council as an Heir Apparent. JD takes the responsibility very seriously and hopes that he can humbly serve in this capacity in a way which shows honor and respect to those who have paved the way for us all and with a fervor that will excite and motivate us to continue in that manner.