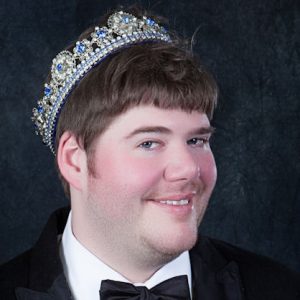 Kevin Fawcett-Majors, a lifelong Alaskan, has been involved in the Imperial Court of All Alaska since his move from small-town Juneau to "big-city" Anchorage. Following college in Las Vegas, Nevada where he voted in his first I.C.S. election, (because a friend of a friend was running), and Kevin returned to Alaska to work with numerous charitable organizations across the state. Thriving in his day job- making lots of money for Alaska's well deserving charities- Kevin took an obvious interest in the I.C.S, especially the Imperial Court of All Alaska.

After using his business experience to assist the I.C.O.A.A. behind the scenes during several reigns, Kevin was crowned Emperor XXXIX in 2011. During his reign, Kevin made great strides in reconnecting with courts outside of Alaska - not always an easy task, considering the isolation of our court. This did not prove difficult for Kevin when you know his dedication to the task and his love of travel.