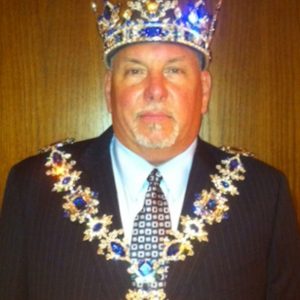 Mark was born in Kennewick Wa. and has lived there ever since. Mark was the son of a Law Enforcement Officer injured in the line of duty, and a Mother who worked in retail. In 1981 his Mother and Father opened a family business that caters to the legal community, after finishing school Mark returned to the family business and has been the operating manager/owner, for the past 37 years Mark has continued to successfully operate this business which provides services across the United States, and into Canada.

Mark began in the court system 20 years ago, and has reigned 4 times as Emperor 28, 30, 33 & 41 Of Spokane and all eastern Washington! He is citizen for life in Las Vegas NV, Vancouver WA, Bellingham WA, and Tacoma WA. During this 20 years of service Mark has had the opportunity to help raise money for children with AIDS, Camp Starlight, Spokane AIDS Network, various scholarship’s through out Washington State. Served on numerous boards both with in the court system and his professional life. Mark is an active member in the Spokane College of Monarchs, Mark and his partner of twenty years, continue his charitable efforts to help make the world a better place. Mark is currently actively involved with the Chamber of Commerce, Fraternal Order Of Police & Sherifs, March Of Dimes. Mark is honored to have the opportunity to serve Nicole the Great, as a member of the International Court Council!