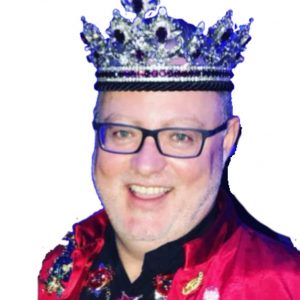 I started in the court system in Alaska in 1992 as a Prince Royale. I found that serving my community was an extremely satisfying part of my life and I became hooked on the Court. Little did I know it would become my life. I volunteered with many LGBTQ organizations, was an outreach educator for our Aids organization, and help found The Last Frontier Men’s Club. In 1994 I moved to San Francisco and was lucky enough to have Simeon and Marlena take me under their wings. From them and the San Francisco court I learned “old school”. While in San Francisco I served as President of the board of the Ducal Court. This was great experience learning the business side of the court system and running a non-profit organization.

After 2 years I returned to Alaska where I continued serving on the Board of the ICOAA. I served as President, Secretary, and Treasurer at different times. Eventually I stepped up as Emperor XXV of All Alaska and had an amazing and successful year with my Empress Rosie Rotton. I couldn’t have had a better partner or Empress. I have been Dean of the College of Monarchs several times and currently serve in that capacity. When Simeon’s girls reached 10 years Simeon handed the reigns over to me and I started Mikey’s Glacier girls which brought together Monarchs from SF, Alaska, Seattle, San Jose, Las Vegas, and Reno every Thanksgiving to kick off Reno’s annual food drive.

It was my pleasure to know and become friends with Mama Jose when she stayed at my house for a week’s visit in 2000. Her words of wisdom and sharp wit will stay with me forever. Indeed, I have come to know, respect, and love many amazing people in the ICS over the years.

In 2001 Rosie, Jackie Best, and I had the bright idea to buy a gay bar in Reno. We purchased the 1099 Club and became involved in the Reno court. I was nominated and accepted the position of Regent Emperor to the 29th Reign of Reno. It was my pleasure to serve my community and give back any way I could. Eventually we sold the bar and Rose and I relocated back to Alaska where I remain to this day.

I was my great honor to receive Alaska’s highest community service awards; The Peter Dispirito Award which is elected by the community and the Wayne Hussy award which is chosen by the College. I don’t do these things for the accolades but these two awards mean the world to me.

I will continue to serve the ICOAA and the ICS as long as there is breathe in this old body.

In Peace, Love, and Unity,

His Imperial Majesty, Emperor XXV of All Alaska

Dean of the College of Monarchs