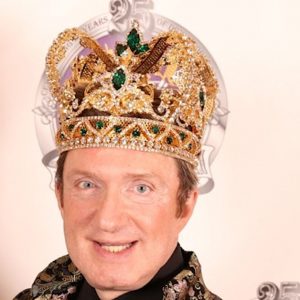 Emperor X and XI of Kentucky

Emperor Thom has been active in the ICS for almost 40 years beginning in the mid 1980’s both in Lexington, Kentucky[VR1] and Buffalo, NY.  He was part of the original group of court members in Kentucky (the oldest Court East of the Mississippi) and one of the first Perpetual Title Holders there.  A two term Emperor, he was well travelled and attended many of the first coronations and events on the East Coast and Ontario.  With his Empress/Lover, the late Michelle Carrington Sugarbaker, he attended Coronations throughout the ICS in the early 1990’s receiving numerous recognitions and titles.  Thom served on the Board and Executive of the Imperial Court of Kentucky, including several terms as the College Chair and as Minister of Protocol.

In addition to his service to the ICS, Thom has served on numerous Boards and Executives of LGBTQ organizations.  He is perhaps proudest of his service as the Co-chair and as a member of the Kentucky Statewide HIV Prevention Committee for several years in the mid 1990’s working to stop the spread of HIV, especially in rural communities.   HIV/AIDS related charities as well as charities for LGBTQ youth and diversity have always been a major part of his focus in fundraising.

A Speech/Language Pathologist and Public School Administrator by training with Bachelors and Masters degrees in Education and post graduate work in administration, Thom has served as a Speech Pathologist and with the Kentucky Department of Education as a consultant in Special Education before moving to New York after the death of his Empress and Lover.  In Buffalo, he became the Coordinator of Youth Services for Erie County and served in that capacity for several years before accepting a position as part of the Screening/Evaluation Team for the Buffalo Public Schools where he is currently employed.

Throughout this period of time he continued to be active in the ICS and the Imperial Court of Buffalo, serving on the College of Monarchs, the Board of Directors and Executive as well as for four of his six terms as Emperor.  He has traveled extensively on the East Coast and the Diamond Courts of Ontario surrounding the ICOB.  He remains a long standing supporter of the ICS and holds the honor of being named Great Grandson to Jose 1 as well as receiving the Emperor Joshua Norton Award and the Double Eagle Award from the Queen Mother of the Americas. He is currently approaching retirement with a renewed fervor to dedicate his time, skills and experience to the ICS and other LGBTQ organizations.  Thom is honored to be a part of this Council and believes that while all politics (and often fundraising) is local, organizational efforts must be national/global to ensure that our FOCUS is not lost.  He is fond of pointing out that his Kentucky Heritage well prepared him for Jose’s Vision and that the Kentucky State Motto of “United we stand, divided we fall”, so closely is mirrored by Jose’s statement of “United we stand, divided they pick us off one by one.” Challenge accepted.  In that same manner he has coopted WWJD to remind us of WHAT WOULD JOSE DO.   Thom looks forward to serving as long as needed and personally to his goal of at least 50 years of service to the ICS.