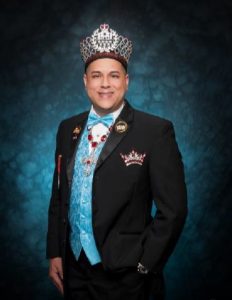 Alamo Empire’s Emperor 24, Will Devo, has been an active member of the International Court System since September 2010. He first became a member of the ICS in Ogden, Utah during Reign 10 of the Imperial Rainbow Court of Northern Utah. He was crowned Ruby Cobra God of Life V at the courts annual Golden Treasures Pageant. During his reign he and his counterpart were responsible for raising money supporting the Make A Wish Foundation. In addition to his pageant title, Will and in his drag persona, Cookie, also held various positions to include Czar 11 and Rainbow Princess 12 during Reigns 11 and 12.
In his non-court capacity, Will serves as a Major in the United States Air Force, where he has faithfully served his country for over 15 years and continues to do so. During Reign 12 in Ogden, Will received a new assignment and was transferred overseas to Yokota Air Base in Japan. During his time in Japan, he maintained an associate membership in Ogden, and continued to advocate and support the successive reigns and monarchs from overseas. Following his overseas tour in Japan, Will was transferred back stateside to Joint Base San Antonio, San Antonio, Texas. It was here that Will learned of the Alamo Empire and after getting settled in his new home, he signed up and joined as a member of the Alamo Empire’s 23rd reign. In San Antonio, Will’s active participation was quickly recognized and he was named Duke de Valero and was later elevated to Prince de La Villita within a couple of months. It was during Reign 23 that Will expressed interest in a possible run for Emperor and was later approved for candidacy by the Alamo Empire Board of Directors and College of Monarchs. After a busy and successful campaign season, Will was crowned Emperor 24 of the Alamo Empire, becoming the first Active Duty Service Member to become a monarch within the ICS. With his Empress and their line of succession and membership, Reign 24 was able to give back over $25,000 to their charities and the San Antonio community. In addition to reigning as Emperor, Will has also served as the Dean of the College of Monarchs and as Vice President of the Board of Directors.