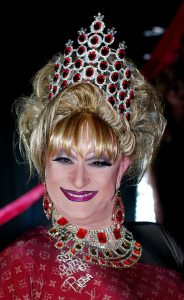 I first started on my path of Fundraising/Philanthropy when I go involved in the Imperial Court System in Chico CA where I attended the University there and worked as a Registered Respiratory Therapist for 25 years.

When I first got involved in 1989 it was an eye opening experience to walk into a bar and see a Drag Show that they were doing to raise $ for Charity, well I was hooked. I soon learned that it was the ICS and was all about helping others less fortunate.

I also noticed we were not visible to others in the community so I helped a group of individuals get our first permit to do the First Pride/Freedom Fest in Chico at the College campus, remember this was in the late 80's. It was well attended and we got our name and our Mission statement out with our rainbow Flags, booths,  and Drag Queens...

We were a fledgling Province/Court under the auspices of Sacramento CA so I and 4 others decided we would get our own 501-C-3 and become our own Imperial Court in 1992 "The Imperial Sovereign Court of the Czaristic Dynasty" I was crowned the First Empress of Chico and also Reigned as Empress 4 (1996-97). I traveled all over the USA, Canada, Mexico and networked and got even more experience/ideas for Fundraising to bring home. I have made lifelong friends including Jose 1, and many here in Boise ID.

I was also asked in 1998 along with other past Monarchs on the circuit to help Las Vegas to also become an Imperial Court, so with our combined knowledge of doing our 501-C-3 we were able to help and they are going strong.

I am proud to hold Life Time Titles in Las Vegas and San Francisco.

In the late 80's early 90's we were facing the AIDS Epidemic and were losing our friends daily. We dug in deep and started Charity funds with those needing help with medications and expenses as well as Food banks. Much like our Jerry Swett and Jimmy Moore Funds we have here in Idaho under the ISGCI that I have been part of since moving here in 2003.

When I moved to beautiful Boise ID in 2003 I joined the BOD and was secretary for several years until I was gently persuaded to don the crown again and reign as Gem Empress 29 (2005-06) I then stepped up again as Regent Empress with 5 other past Monarchs to Reign (2015-16).

This is my 30 years of Fundraising and Involvement in the ICS all while wearing a dress and a wig for Charity...I would not change a thing it has been a wonderful journey and I know in my heart that I helped people less fortunate get what they needed when they did not think it was possible.

The lifelong friendships alone made it the best journey of my life.