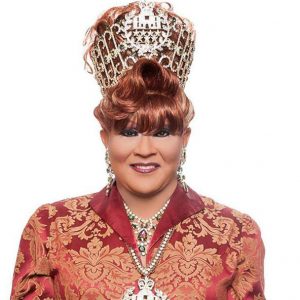 I started as an entertainer in 1992 in Greensboro, North Carolina. What started off as a dare eventually turned into something more. I started doing shows and competing in pageants as a way to help pay for some of my college expenses.

In 1996 I moved to Austin, Texas where I learned about the International Court System. I thought to myself, what an excellent way to give back to the community for supporting me as I had developed myself as an entertainer in my earlier college days. I became a member of the United Court of Austin, learned about the court, and was elected as Empress VII in 1999. Throughout my time in Austin I served as an officer for 4 years in the positions of Secretary and President.

In about 2007, my partner and I moved to Corpus Christi, Texas to be closer to our jobs and closer to family. We quickly got involved with the Royal Sovereign Imperial Court of the Texas Riviera Empire. In 2009, I was elected and served as Empress XXI and later served as Secretary to the Board of Directors.

In 2010, the oil exploration business started to pick up around the San Antonio area. Our client relocated their office from Corpus Christi to San Antonio. We all packed up again and moved to Seguin, Texas to be closer to our client and our contract area. Since our move I have continued to be active by serving as a board member and as treasurer to the Royal Sovereign Imperial Court of the Alamo Empire. In 2014, I had the honor of being elected as Empress XXIII of the Alamo Empire.

In addition to serving as Empress of several cities, I have had the privilege of being an active member of Her Majesty’s Parliament, since its inception which included approximately 3 years as serving as Executive Secretary. My over 20 years of history with the International Court System has given me the opportunity to learn about myself and the many lives I’ve had the opportunity of interacting with. It truly has been an educational and growing experience.