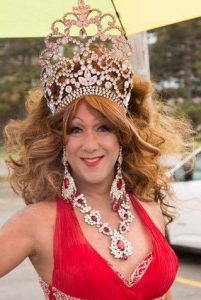 Recipient of the International Royal Order of Jose the First

The Celestial Guardian of Glitz, Glamour, Tramps and Ho’s Honoring the Past and Looking to the Future Her Imperial Majesty Empress 19 & 26 CoCoLaTique Minister of Protocol chair of the College of Monarchs

Michael has been a member of the Imperial Court of Buffalo (ICOB) for more than 16 years.

During that time, he has served as Empress twice (19 & 26) and served 3 years as President of the Board of directors. During his tenure as President, Michael instituted procedures that have streamlined the Board’s Procedures, improved communication, made documents and resources available
to each Board member 24/7, thus allowing the Board the ability to discuss and approve measure and policies faster and more thoroughly. In addition, Michael created documents, forms, and protocols that increased the ICOB’s accountability and strengthened the Courts ability to Fundraise and be
good stewards in the community.

When Michael wasn’t the Reigning Empress or President of the Board of Directors, Michael was (and is currently) Chair of the College of Monarchs and the chief advisor to the Board of Directors. As College Chair, Michael’s advice is not only sought out by the Board and Members of the ICOB but by
other College’s and Boards/Executives of surrounding courts. Michael has been the Minister of Protocol for several Reigns since Reign 19 including Reigns 26 through the current Reign 29. Michael has sat on and/or chaired 2 Protocol and Procedure Review Committees who were charged with
reworking the entire P&P document to make it more user friendly and less “wordy”, take out contradictory language, and make the entire document’s intent clearer.For the past 7 years, Michael has been invited by Gay and Lesbian Youth Services of Western New York to be a key presenter at the annual Western New York GSA Conference. The conference, held at a
different local high school, brings 400+ students from GSA’s across WNY together to discuss topics chosen by the host school’s GSA. Michael’s sessions bring the highest attendance of any presenter
and he (along with the guests he brings with him) answer questions from the students (and advisors) and lead discussions on topics ranging from Drag, the Imperial Court of Buffalo, the International Court System, Transgender Issues, Coming out, HIV/AIDS and LGBTQ History.

The Presentations at the GSA conferences led to Michael being asked to sit on the Board of Directors of Gay and Lesbian Youth Services of WNY. On that board, he currently sits as the chair of the specials events committee and as a member of the programming committee.

As a “day” job, Michael is the General Manager of a privately-owned Restaurant in Hamburg, NY located about 30 minutes south of the City of Buffalo. The restaurant owners and Michael share a vision of being a community minded business utilizing and supporting local businesses and farms as much as possible and being a positive influence in the community.