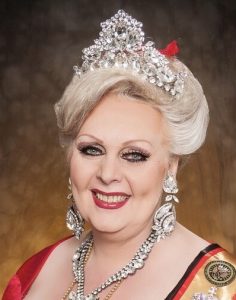 Danielle’s journey of community activism began some time ago in the 1980s, during the AIDS Crisis of the Midwest, when she answered the ʻcall-to-armsʻ and advocated for the equality of people living and dying of AIDS. As the first and only trans person elected Empress of the State of Nebraska, Danielle fought for and furthered civil rights for everyone; including being the first to challenge a major retail chain to develop fair policies for transgender employees, amid her own transition in the early 90s. Over the years, Danielle has been involved in multiple campaigns to seek fair and equal rights to those in the LGBTQ ccommunity, from marriage equality to adequate health care for our transgender family.

Danielle’s work continued in San Francisco as a member of the Imperial Council of San Francisco. While in San Francisco, Danielle was trusted to serve as the councilʻs rrepresentative to Her Majesties Parliament, as well as assisted the Grand Ducal Council, in their effort to raise money for groups who continued to further the warm cooperation of these respective organizations. Her participation in the Trans March and historic raising of the Trangender flag at the Harvey Milk Plaza instilled an even deeper sense of pride in herself and the wonderfully diverse LGBTQ community.

Danielle has gone on to reign as Empress XXXIII of Hawai`i, and has traveled to several other realms. In doing so, Danielle continues the tradition of building mutual support between various courts through the exchange of ideas and techniques to further mutual goals and fundraising endeavors. While in conjunction with other Imperial Family members, Danielle has hosted events to assist other realms in their fundraising efforts.

Danielle currently serves the Imperial Court of Hawaii (ICOH) as a member of the ICOH Board of Directors, Privy Council Chair and is the Hawaii State co-chair for the GLBT Civil Rights Network. Danielle has been honored with the Imperial Royal Order of Jose I and an International Court Commendation from Queen Mother 1 of the Americas, for standing up to discrimination within our own community.

Danielle continues to further her experience and skills in our community by working to bring to light the many facets of the LGBTQA community because by doing this together, our community is a voice and force that cannot be stopped.