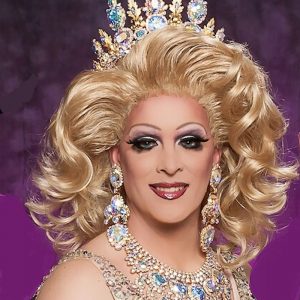 Destiny B. Childs came onto the Drag scene in 2003. She started out performing only once or twice a month at a local show in Washington DC known as Sequins and Studs, a variety show featuring drag queens and live performers. In July of 2003 Destiny started working as the Manager of Freddie’s Beach Bar and the owner was in need of a Drag queen to take over the drag show, Freddie’s Follies. Freddie Lutz took a chance and told Destiny she would now be the host and Show Director. In December of 2004 during a snow storm Destiny received a call from the most sought after premier show in Washington DC. The show director of Ziegfeld’s called needing a last minute girl to fill in and Destiny jumped at the chance. That night her career took off.

Destiny has now been performing for over 15 years in the Washington DC metro area. Destiny started competing for titles shortly after she began entertaining. Destiny has been blessed with winning multiple titles over the last 13 years. Her titles include Miss Zodiac 2005, Miss Freddie’s 2006-2007, Miss International Gay Rodeo 2007, Miss Gaye USA 2008, Miss Gaye America DC 2008, Miss Gaye Universe 2011, was honored as Empress 2 for the Imperial Court of Washington DC (the very first seated Empress), and Miss Ziegfields 2016.

Destiny has the pleasure of traveling the United States performing all over not only just to perform, but she is able to showcase her talents to raise money for charities all over the country. Destiny has been blessed to spend the majority of her time hosting various fundraisers and benefits to raise thousands and thousands of dollars. Destiny has just hit her 10 years anniversary hosting the Capital Pride concert in our Nation’s Capital! Destiny has also had the pleasure of performing at the historic Howard Theatre, Maryland LIVE Casino, and the Hippodrome Theater in Baltimore, MD

Destiny joined the Imperial Court of Washington DC in 2011 and was crowned Empress 2, the First Empress of the ICWDC. Destiny has been on the board of Directors for the Imperial Court of Washington DC for over 4 years. She has served as the Fundraising Chair, Vice President and is the current President of Board. Destiny works hard to ensure all members of the ICWDC feel welcomed, safe, and loved. Destiny is determined to continue the mission of the ICWDC with her Board of Directors as a single unit, a team that strives for greatness. As Destiny works with her members, she is humbled to be a part of a strong and faithful group that loves to help build up each other and lift our community up in many ways.