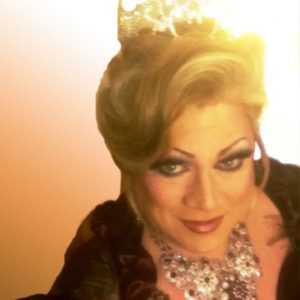 Empress Misha Rockafeller was introduced to the art of female impersonation on Halloween 1986 and came to her first title as Debutante 12 of Emerald Empire in Eugene OR where she also studied Fine and Applied Arts at the University of Oregon. Through college she worked with GreenPeace USA on numerous Marine Ecology campaigns while also serving on the Student Senate.

In 1989 after college Misha moved to Portland, Oregon to work with the local GreenPeace office and became involved with the Imperial Rose Court. During the 90’s she went on to win the titles of Sweetheart of Portland , Portland La Femme Magnifique, 4th Runnerup & Runnerup La Femme International, Competed in Universal Showqueen and won Island Goddess twice, Miss Heart of Oregon, Empress 38 of Portland, Entertainer of the Year, Humanitarian of the Year and La Femme Magnifique International in 1997.

As Rose Empress 38 Misha and her Emperor worked closely with the youth, community roundtable meetings and meetings with the Mayor and Police Chief helped to keep the underage nightclub open. They also help to usher in the first LGBTQI Marriage acts in the country through both community roundtable discussions with then Mayor Katz. Misha served on several non profit boards and was also a OPS II and MSM Director at Cascade AIDS Project. Through the 90’s Misha was the first Dragqueen to officiate an official city wide parade as a MC for the famous Rose Festival Parade on the corner of 10th and Stark Street in downtown Portland. She also created the Mr/Miss/Ms Gay Pride Pageant system in Portland which is now its own 501c3 serving the community through its fundraising efforts towards LGBTQI scholarship programs. Misha also served as the Entertainment Chair and Vice President for Pride NW which hosted the annual Pride Parade and Celebrations. But art was always woven into Misha’s world through multiple exhibits throughout Portland.

Throughout the last two decades art became a leading role. Misha became Grand Duke, Emperor, Humanitarian of the Year, ICPR to Terry Sidie and Empress 40 of Sacramento . The Sacramento LGBTQI Center awarded Misha its highest honor with the Spirit of Pride Awards for her ongoing philanthropy through the arts . Misha was named Empress of the Decade by Queen Mother Nicole the Great and then in 2017 Prime Minister of the ICC and successfully created the regalia and the ceremony for the historic crowning of Emperor I of the Americas Terry Sidie. “For 31 years the Art of Drag has provided a me platform for philanthropy, advocacy, education and identity. For 51 years I continue on my journey learning to communicate through art”.

Sacramento has also played home to the famous Kennedy Gallery , a 4000 square ft three floor minority based gallery in the heart of Midtown. Over 3000 guests visit the Kennedy on the monthly artwalk in the state capitol, the Kennedy has ushered thousands of emerging artists in to the art world and has hosted some very notable ones too. The Gallery has provided Women, Persons of Color, LGBTQI and youth an equal opportunity to reach the market. Art is a chance for us to tell our story through the arts in our way. Art inspires, provides hope and art makes us civilized… it makes us human. Misha is a strong advocate for the arts locally and internationally and currently serves a seat on the Race & Cultural Equity Task Force with the Sacramento Metropolitan Arts Commission. Our history and our culture are at risk but through the arts we can have the opportunity equally to share our stories and in our way through our art forms.

I am honored to serve my community once more as I take this seat on the ICC. I very much look forward to the happiness and the art we will create together to further serve our communities.