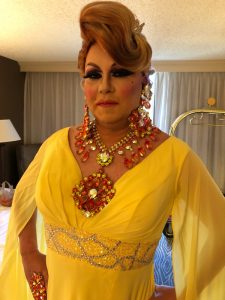 I have been involved in the court system going on 34 years. I started my drag and court journey with the Imperial Souvereign Court of Spokane, where I held 3 title postings; Debutante, Miss Gay Spokane and Empress. During this time, I was involved in the fort raising money for the community. I spent 3 years on the Spokane AIDS Board. 6 Years on the board of directors for the ISCS. 6 years guiding and mentoring up and coming leaders in the court. I also for 3 years had my own show which was held every Thursday night for up and coming performers. in 2000 - 2001 one I held the position of Miss Gay Washington in which I traveled the circuit helping raise money for the many charitable organization for other cities along with my continued support of my own city. In the 2092 I met my husband at the time and moved to Vancouver Washington. My first year there I held a board position, i than stepped back for about 13 years to concentrate on home life, school and a career. Within that time I still supported many GLBTQ organizations, raising funds at drag shows and other avenues. During a 15 year career I sponsored my business sponsored several GLBTQ organizations with the Vancouver and Portland area. In 2017 I became the 44th elected empress of the ISCRE where I severed on the board of directors, helped raise $10,0000 in a year for Martha’s Pantry, Peacock in the Park and Audra M Scholarship fund. In my 33 years I have helped raise thousand of dollars that have helped with education and fight of HIV and aids, equality rights for the GLBTQ, Education and much more. I plan to continue that s mission until I am no longer able.