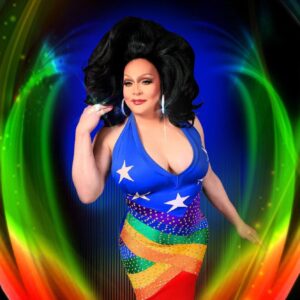 Alexis Valerio was born and raised in San Antonio, Texas.  She was always drawn to the stage, and in 1993 began performing as the female illusionist Alexis Nicole Whitney.   It didn’t take long for her to find her footing in the San Antonio drag scene and she showed great drive and promise even in the early stages of her career.  However, tragedy struck just 5 short years later in 1998.  That year, she was diagnosed with a severe case of meningitis.  She spent two weeks in a coma where her heart stopped twice.  Her case was so bad that doctors advised her that she would most likely be paralyzed and wheelchair bound for life.  Through hard work and determination, she defied her doctors and regained full mobility throughout her body.  While she does have compete loss of vision in both her eyes, she uses that as a constant reminder to not take life for granted and to live each day to the fullest.

In 2002, she joined the Imperial Court in San Antonio under Emperor 11 Jon Z and served as Imperial Princess the following year under Empress 12 Keana Lord and Emperor 12 Ken Big Johnson.  Those two reigns planted a seed inside her and she knew that one day she wanted to not only be an Empress and help her local community, but also an heir so that she could help people from all over North America.  She continued to support her community over the next several years and performed at many charity benefits all over the city.

After working as a female illusionist for almost 15 years, Alexis knew that there was more to it than just presenting as her on stage persona, and in 2007 she came out as a trans woman.   Over the years, advocating for trans rights and mentoring trans men and women everywhere has become a passion for Alexis and she never shies away from engaging in open dialogue around the subject.

In 2011, Alexis moved from San Antonio to Houston, Texas.   Once again, she quickly found success in the Houston drag scene and became one of Houston’s favorite hosts and show directors.  She was also quickly becoming a favorite in the pageant scene.  She has held two national titles including Miss Unlimited in 2012 and All American Goddess at Large in 2017.  She has also held countless other state and local titles, including many for charity.  Even during this time, she used her public platform to help her community and raise awareness about causes she cared about.  For Example, during her reign as Goddess, she raised money for the Red Ribbon Campaign and always spoke genuinely about the needs of those suffering with HIV.

At the same time while enjoying success on the pageant circuit, she never forgot about her dream of one day becoming and empress and heir.  In 2015, she decided to follow that dream and joined the Imperial Court in Houston and was Imperial Princess under Empress 31 Angela Mercy and Emperor 31 Susan Hayes.  In early 2020 she was elected Empress 36 by the Houston community along with her drag son and best friend Mykey Whitney.  Together, they have successfully completed one of the longest reigns in ERSICSS history by reigning for 2 full years during the global pandemic.

To this day, Alexis continues to thrive in a world she can only hear and touch.  She works 5-6 nights a week as an entertainer and host.  Some people may consider her vision loss as a disability, but she considers it just an obstacle that she was able to overcome and conquer.  She hopes each and every day to motivate those in similar circumstances to defy the odds and reach for their goals.  She also hopes to inspire those in the trans community to love themselves and to live their most authentic life.   If she accomplishes these two things, then she knows all the blood, sweat, and tears she endured to get to this point were all worth it.