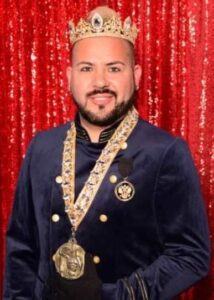 Jaime Brown was born and raised in El Paso, Texas, but has been a Colorado “native” since the age of sixteen.

Jio was born in 2005, when a “closeted” Jaime competed for the title of Mr. Tequila Rosa’s at Denver’s only LGBTQ Latino bar and needed a stage name after winning such title for
2005-2006. Being a title holder opened the doors for serving the community.

Jio went on to become Mr. Gay Pride of All Colorado in 2012 and volunteering for El Futuro. El Futuro was an HIV prevention and educational program geared towards the Latino community.

Jio became involved with the imperial court of Denver in 2018 while holding the title of Mr. Rocky Mountain Shinning Star. He was invested with the title of Baron by the Reign 45. His passion for the court and hard work for the community did not go unnoticed, Jio was bestowed the title of Prince Royale for Reign 46.

Jio is the 48th elected monarch of the Imperial Court of the Rocky Mountain Empire In Denver.