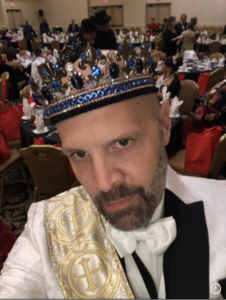 Steven has an advanced degree in social work and is a hospice social worker. Before moving to Palm Springs, Steven was employed with Horizon Home Health and Hospice, where he served as the Director of Social Work and Volunteer Services. Steven was able to introduce LGBTQ education to the company onboarding policies at Horizon.

Steven began his involvement with The International Court System during his

years in Seattle. He was extremely active during Carla and Silky's reign 1996-1997. He has also been involved with The Imperial Star Empire of Alameda County and The Imperial Sovereign Gem Court of All Idaho. Steven served as Board of ISGCI for reigns 42 and 43.  Steven created a fundraiser for the new LGBTQ community center in Rexburg, Idaho and helped raise over 4,000 for that organization.

Steven addressed his addiction issues on November 07 2007 and has remained sober. He has been asked to share his recovery story in California, Washington, Texas, Georgia and Idaho.

Currently, Steven is serving as Board Secretary for Camp Crystal Clear West; a sober men's recovery weekend that is held in August. Steven has been active in creating the foundation for this gay men's new recovery retreat.

After the death of Empress Rae Jean, Steven was in dialogue with Queen Mother Nicole and has been active chair of  the Imperial council on Recovery for the ICC.