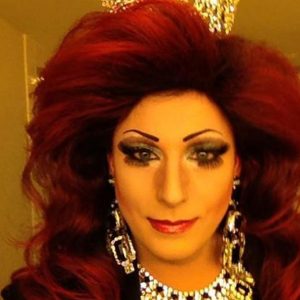 Shortly after moving to the Bay Area in 2006, I became involved with the Imperial Council of San Francisco, supporting reigns, helping with campaigns for Emperor and Empress and attending events. It was in 2011, when working on a campaign I got my start in drag and received a permanent title in the Imperial Family as an Imperial Princess. From that time, I have served on the Board of Directors and most recently as Board Secretary. In 2014, I had the honor to be elected the 49th Empress of San Francisco, as well as bringing in many new titleholders who continue to grow within the Court System. I had the pleasure and honor of personally knowing our Beloved Founder, Jose Julio Sarria who taught me that though we may not always get along, we are a family.

During the time with the Imperial Family, I have always made it a mission to remember where i have been and where I will go through maintaining positive relationships with members of the community, while making a commitment to honesty and integrity. I support and honor those who have come before me and look forward to welcoming and growing our organization, continuing many of our time honored traditions and embracing the future as well as change.

Misty has a passion for working with those in crisis, homelessness and raising awareness for mental health, and has worked in the mental health setting since 1995.