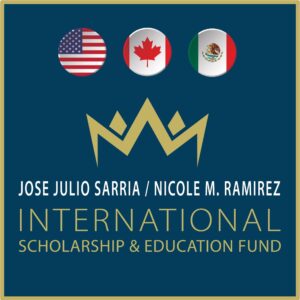 This scholarship honors the legacy of José Julio Sarria, a decorated veteran of World War II, a LGBT civil rights pioneer, a historical icon and a noted performer.

In 1961 Jose became the first openly gay candidate to run for public office in North America, running for the San Francisco Board of Supervisors position that would later be held by Harvey Milk. In 1965 Jose proclaimed himself Empress of San Francisco and founded what is now known as the International Court System- a group of 70 affiliated independent charities in the United States, Canada and Mexico, dedicated to improving their communities and making them safer places for everyone, including members of the Gay, Lesbian and Transgender communities.

Murray-Ramirez has been a Latino and gay activist for 45 years serving in roles as past national board member of the Human Rights Campaign, past National Chair of LLEGO, the National Chair of Stonewall 25, and the only gay activist in the country who has been elected to all four national boards of the Marches on Washington, DC. He was also elected chair of the Millennium March. He is the past State Chair of Equality California and is currently serving a four-year term on the national board of the National Gay and Lesbian Task Force. He was also appointed by the county Board of Supervisors to the Regional Task Force on AIDS in the 1980s and has served as a county deputy marriage commissioner.

The Jose Julio Sarria  / Nicole M. Ramirez Scholarship Fund & Education Fund is one of over 30 scholarship funds offered across the United States, Canada and Mexico by the International Court System and its 70 affiliated Courts. The first Court scholarship started in 1979 and thousands of scholarships have been awarded since then.

The Scholarship and Education Fund will award grants to individuals that are pursuing an advanced course of study beyond high school and may award grants for educational purposes to organizations with educational projects on LGBT issues.

To make a donation to the Jose Julio Sarria Scholarship Endowment, use this link: www.josescholarship.org