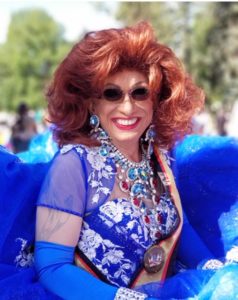 Founder and president of Mile High Comics, Inc., the largest retailer of collector comic books in America. After 47 years in business, we serve the needs of over 100,000 comics fans around the world, and keep over ten million back issue comics, magazines, trade paperbacks, hardbacks, and graphic novels in stock at all times.

In 2003, I was I was awarded the prestigious "Defender of Liberty" trophy for my advocacy of free speech and expression by the Comic Book Legal Defense Fund. I am the only comics retailer ever to receive this honor.

While I only recently identified as bisexual, my advocacy for the GLBT Community began in 1974, when I worked with the Gay Student Alliance at the University of Colorado in Boulder to help defend Boulder City Councilman Tim Fuller and Mayor Penfield Tate from a recall election prompted by Fuller's drafting of one of the earliest municipal GLBT anti-discrimination in employment ordinances in America. We defeated the effort to recall Mayor Tate, but (by just a few votes) lost our effort to keep Tim Fuller in office. We did, however, manage to bring much greater awareness to the social inequities suffered by the GLBT members of our Boulder community.

After leaving college in 1977, I married, and eventually purchased 32 acres near Boulder to operate as an organic vegetable and herb farm as an adjunct to my comics work. My wife, Nanette, and I raised our four beautiful daughters on the farm, while actively participating weekly in the Boulder County Farmer's Market.

It was while farming in 2003 that I was bitten by a mosquito carrying the West Nile Fever virus. A week later, I was hospitalized with severe encephalitis. It took me three years to recover from the cognitive damage caused by this debilitating brain illness, only to be struck down by West Nile again in 2007. I was then severely ill for another three years.

In 2010, as a part of my second encephalitis recovery effort, my doctor had me retire from farming. He then encouraged me to travel to the East Coast to attend comics conventions, as he believed that the stresses of travel (and my transacting business deals) would help me to rebuild the cognitive skills that I lost to encephalitis. I was unable travel alone, however, so I employed a young lesbian boy/girl, Ashley Imbese, to be my assistant. Ashley and I traveled together frequently for the three years, during which time she took me to LGBTQ clubs in every major city along the East Coast, and up into Canada.

It was at these clubs that I discovered that I truly loved drag performance, and the entire LGBTQ world. This discovery prompted me to then seek out members of the Denver Community, which quickly evolved into my working with Reign 38 of the Imperial Court of the Rocky Mountain Empire. After two years working on the periphery, I was made a Citizen of the Realm by Emperor 40 Chase Pelletier, then appointed Czar 41 by Emperor Caeri Mancini, and Prince Royale 42 by Emperor Richard Brendlinger. During my 5 years of participation with the ICRME I have raised approximately $100,000.00 for the charities we serve. I have also discovered and embraced my own feminine side, performing enthusiastically as Bettie Pages in our annual Turnabout events.

During the latter part of 2016, I became a aspirant for Emperor 44 of the ICRME. While I was the only potential candidate to file for Emperor 44, I was unable to resolve some thorny issues with our Board of Directors prior to our deadline for Candidate Review. Rather than giving my implied assent to that which I could not endorse, I reluctantly withdrew my candidacy. Soon thereafter, our Queen Mother offered me the opportunity to work with her and the International Court Council as an Heir Apparent.

In June of 2018, I publicly announced that I was gender fluid to all of my worldwide customers, and introduced them to Bettie. About 10,000 of my customers refused to buy from us after that revelation, but 90,000 remained.

In February, 2019, I was offered the opportunity by our Queen Mother I of the Americas Nicole Murray-Ramirez to switch my gender identification on the International Imperial Court Council, and was then subsequently crowned as Imperial Crown Princess Bettie Pages. Soon thereafter, Queen Mother adopted me as her daughter, and then appointed me as her Imperial Lady-In-Waiting

I am honored beyond all measure by our Queen Mother's kindness and support, and will now seek to do everything in my power to earn her continued confidence through positive action on behalf of our entire Community.