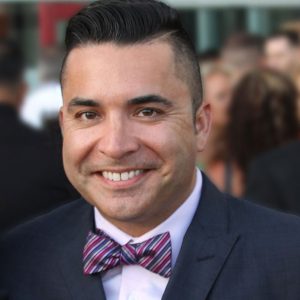 His Imperial Highness the Majestic Leonine Crown Prince for Life Russell Roybal First Imperial Grandson to Empress I Jose, the Widow Norton Favorite Son of Her Most Imperial Catholic Majesty Empress Nicole the Great, Queen Mother of the Americas Honorable Member of the International Court Council.

Russell began involvement in the International Court System with the Imperial Court de San Diego, Inc. He served as Prime Minister to Emperor XXV Noel and Empress XXV Roxy Bleu. After his service during the XXV reign, Russell was appointed to the board of directors of the San Diego Court. He was appointed to the International Court Council in 2010.

Russell is noted fund-raiser, trainer and social justice leader. He is the immediate past chair of the board and a senior consultant with the Grassroots Institute for Fundraising Training (GIFT), a nonprofit training group focused on building the fund-raising skills of people of color and others working for social justice. He is an experienced development professional, having served as development officer and director for local and national nonprofit organizations.

Additionally, he has served in various leadership capacities on the boards of directors of several nonprofit organizations, large and small, local and national. He currently serves on the board of directors of the National Committee for Responsive Philanthropy. His areas of expertise include fund-raising, organizational development, and board development. He has worked with hundreds of groups and thousands of individuals, motivating them to get excited about fundraising. Russell puts the "fun" in fundraising!