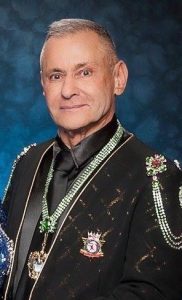 Gerald (Jerry) Coletti has an extensive history of service, both to the San Francisco community and to the Imperial Court System. His service to the Court began at the election of San Francisco’s First Emperor. Jerry served as both a Knight in Service to Emperor I After Norton, Marcus Hernandez, and as a member of Marcus’ Privy Council.

After 20 years participating in the Imperial Court of San Francisco and as a member of the Emperor’s Council of San Francisco, Jerry was elected the 17th Emperor After Norton in 1989. Known as "The Leather Lion Emperor", he and his Empress, the beautiful and talented Pat Montclaire, established the Court of the Lion and the Lady (1989-1990). During their reign, they, along with their many courtiers, ventured into new communities within the Bay Area, culminating a Sainthood to the Sisters of Perpetual Indulgence Inc. for both Emperor Jerry and Empress Pat. The Court of the Lion and the Lady helped to dismantle walls that existed between the North of Market Drag Community with the South of Market Leather Bars, which resulted in drag queens finally being allowed into Leather Bars. Upon the completion of his reign, Jerry continued his active involvement with the Emperors Council of San Francisco, and was frequently elected as a representative to the Imperial Council Board of Trustees (later Board of Directors).

In recent years, Jerry has managed the Brotherhood of Emperors Awards for the 2016-2017 Reign. During San Francisco’s 52nd Coronation Celebration, Jerry was named Brother to Queen Mother of the Americas, Nicole the Great, and was awarded the International Order of the Double Eagle.  He was also a recipient of the Royal Order of José, the Royal Order of Emperor I Gregg Lucio, and named as an Honorary Citizen of San Diego. Jerry is currently serving on the Ethics Commission and the Privy Council.

During his many years of involvement, Jerry’s fondest memories are those of his reign with his Empress, Pat Montclaire, those shared with his many friends and chosen family, and the deep and abiding friendships he has established with Queen Mother Nicole the Great and the Absolute Empress I de San Francisco, Mama José.