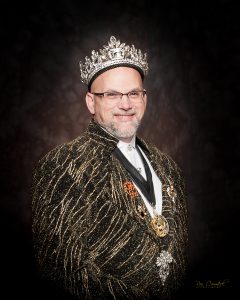 A native of California, Robert grew up in Monterey, CA.  After moving to the Bay Area, I graduated from The University of Phoenix with a Double Major in Business Administration with an emphasis on Management.

I started in the court system in 2005 after relocating to Las Vegas from the east coast.  I was introduced and quickly became hooked during Reign 7.  I discovered that I could use the court system as a social outlet and also be a part of a community.  Soon the court became a huge part of my life.  I worked with NGRA and the Sisters of Perpetual Indulgence during Reign 8 which lead me to competing for the title of Emperor 9 of all of Las Vegas.  Being new to this organization, it was a learning experience that I value and  drove me to continue to give back to my community in Las Vegas.

Katrina Davenport stepped up as Empress 13 of Las Vegas, and requested 13 male titleholders as regents to assist Katrina is her year as empress.  I continue to use the Regent Emperor 13.9 title as I was proud of Katrina and our accomplishments during her reign.

A highlight of stepping up as Emperor 15, a recipient of the Humanitarian of the Year, given to my Empress and I from the Las Vegas GLBT Center.  It was a proud moment that acknowledged years of fundraising and outreach.  Years have passed and 4 reigns as Emperor of Las Vegas, life takes us in ways you don't expect.  I decided to relocate after finding love in Seattle; Rainier 35 and 40 Eric Bonesteel.  We were friends on the circuit, but never available and now it was time.  Fate had taken me to Seattle.

Reign 17 in Las Vegas was composed of 10 past monarchs - 5 empresses and 5 emperors.  Even though I had recently relocated to Seattle, I stepped up and was asked to travel and represent Las Vegas in the Pacific Northwest and Canada.  This expanded my exposure and assisted in my introduction to a variety of new courts.

Not wanting to overwhelm myself, I took time to acclimate and become a part of a different city and a  different court and so I remained an active member in Seattle.  One year later, I became a board member, Vice President, in charge of the JC/Lady Graytop Scholarship Fund. The hard work i put in during that year led to me being presented an award by my fellow members of the organization, Court Member of the Year.  After one term as Vice President, I continued  my involvement with the Board of Directors and became President of the Board.

As President of the Board of Directors, I have made it a goal to create two solid reigns of monarchs and making their years full of memories for each one of them that fills them with honor and pride, as well as to building up the future of the Court of Seattle..

At Las Vegas Coronation 19, it was an honor to receive the distinguished honor of the Double Eagle from Nicole The Great.

In Service to the Community,

Emperor IX of All of Las Vegas

President of the Board of Directors