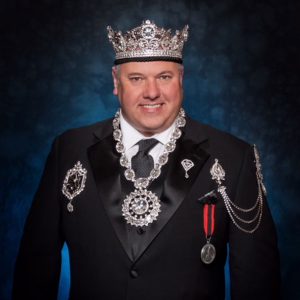 A member of the Imperial Sovereign Queen City Court of the Buckeye Empire, (ISQCCBE) for 10 years, elected the Silver Jubilee Emperor, Emperor 25, Imperial Crown Prince Royale to Reign 24. Former Board of Directors, Treasurer, and a current College of Monarch’s Member. As Emperor, along with my Empress, we were proud to create new events and create new ways of Fundraising. At the end of Reign 25, together with our membership and community, we raised over $107,000.00.

A Finance Director for Emergency Services for the last 17 years with a Local Government Agency and serving my second term as an openly gay, elected, Public Official for Franklin Township, Ohio. I serve on many local boards and committees, and work hard to make sure our elected officials are fiscally responsible to our local taxpayers.

Born and raised in Kentucky, I crossed the bridge into Ohio after meeting my partner of 19 years and legally marrying in July of 2015. Together, we enjoy traveling, spending time with our families and friends, volunteering in our community and fundraising to help our local charities and community. We have one, beautiful, 3 month old Great Dane, Fiona Grace.