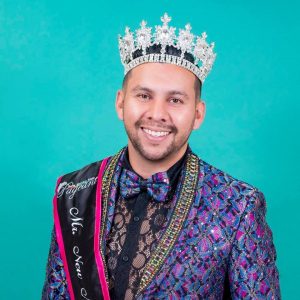 Topher Daniels has been a member with the United Court of the Sandias since Reign XXI.

In his time as a member he has been Line Member of the Year in Reign XXII, Prince Royale XXIII and Emperor XXIV. Additionally he has served as a Member for Queen Mother Nicole the Great’s Privy Council.

During his time as a member he has traveled to over 36 ICS Coronations to represent the United Court of the Sandias. Additionally, he has served the community as a ABQ PFLAG Board Member, ABQ Pride Board member, Equality New Mexico Statewide Political Director, Mr. NM USofA, Mr. Duke City and is currently Mr. New Mexico Pride 2018.

Professionally Topher works as a middle school educator, where he sponsors the GSA and Student Council. Before becoming a teacher he worked as a political aid to the Congresswoman Michelle Lujan Grisham ,  New Mexico Attorney General Hector Balderas, State Auditor Elect Brian Colon and Albuquerque Mayor Tim Keller. He continues this political advocacy as a volunteer with numeros statewide organizations and boards.