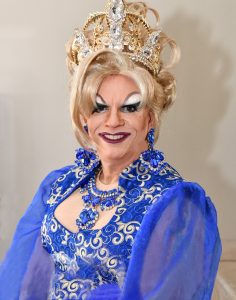 My involvement with the Imperial Court System goes back to 1986 when I became aware of the “Court, ICOAA” while living in Anchorage, AK. Since then, I have served in several capacities in Alaska, Hollywood, San Francisco and now Florida. In total, 32 years of service to my communities and to the Imperial Court
System and never once, have I ever turned my back, said no or not fulfilled my commitments that I embarked upon.
At this time of my life, it would indeed be my sincerest honor to stand beside you, in your service to our community, as I have always respected you, your position, your passion and your commitment to the Court Community. We may have not always agreed on everything, but your commitment and friendship has always been notable to me, for which you have gained my utmost respect.
Resume:
1987/1988 Mr. Gay Alaska
1988/1989 Denali Emperor 16
1991/1992 Aurora Empress 19
2000/2001 Co-Chair to The Imperial Council of San Francisco
2002/2003 Absolute Empress 37, San Francisco
2017/2019 Founder Imperial Sun Empire of All Florida
Protector, Czarina of All Florida
Over the years, I have been mentored by some of the late great monarchs, including but
not limited to Pepe 2, Myrna LaChoy 11, Mad Madalyn 9, Jose 1, Nicole the Great, Char 13, Remy 19, Morgana 5 and many others.