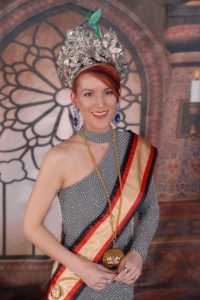 Her Imperial Majesty, Absolute Empress V Cookie B Childs Von Shigglesworth joined the Imperial Court of Washington DC in 2013. Since then she has served as Secretary and Member at Large for the Board of Directors, was awarded the title of Princess Royale for Life to Reign 3 and frequently spearheads unique fundraising initiatives. She had the distinct honor to be elected the first biological female and Ally Empress of our Nation’s Capital in 2016. Cookie spent her reign year spreading a message of inclusion, that all are welcome to the table and lending voice to the voiceless. This message of inclusiveness and acceptance was achieved, in part, through frequent collaborations with DC Leather Pride, ONYX Mid-Atlantic and The DC Eagle. She was chair for The Year of the Woman and co-chair of the ICS Fights Cancer initiative, raising funds and awareness for cancer research.

Originally from Nebraska, she currently lives in Richmond, VA. In addition to her work with the International Court System, she is a founding member and executive board member of Genworth Financials’ LGBT Forum and volunteers her time at local area food banks, LGBT Youth organizations and animal shelters.