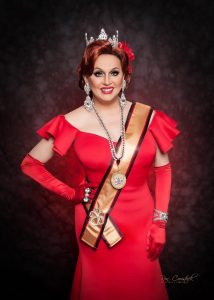 The 35th elected Empress of Vancouver, British Columbia- The Mother Court of Canada and the 27th elected princess of The Greater Vancouver Native Cultural Society, Empress Jaylene Tyme is a proud clean and sober First Nation trans woman and visible member of the Vancouver's LGBTQ2S+ community. She is featured regularly in documentaries, online stories and articles furthering education on diversity. She believes that it is important celebrate the power of community by contributing to the energy of our world with passion and positivity. We do this together for each other, with the opportunity to inspire and educate.  Our identities, beautifully diverse and wonderfully unique
Empress Jaylene is invested with her court locally, ensuring that the traditions and protocols are understood, honoured and communicated effectively. She also rally’s behind each reign’s chosen charities and raises funds and awareness for their causes.
As one of the original Heir Apparents to Queen Mother I of the Americas-Empress Nicole the Great, Empress Jaylene served over four years on the council as a member and also as Canadian First Vice President. She takes pride in being included in a group of international monarchs whom have been ambassadors to their own courts as well as supporting the initiatives of the International Court System. Empress Jaylene was honoured to return to the International Court Council in 2019. She is grateful to continue as a contributing member on this dynamic and diverse council of leaders.
As one of Canada's premier celebrity impersonators, Jaylene Tyme brings glamour and sophistication to her uncanny character portrayals. A beloved mainstay in Vancouver's LGBTQ2S+ community, Jaylene is the headliner for the Sunday Drag review LEGENDS CABARET at The Junction night club in Vancouver, BC.
During the day, Empress Jaylene is a celebrated makeup artist and Talent leader for the Pro artist boutique CurliQue Beauty- an extension of world renowned Make up and fashion college-Blanche Macdonald Centre. Her passion is to be part of the community as a leader in artistry but also an example that great accomplishment is achieved through authenticity, tenacity and hard work. The only limit is your imagination.