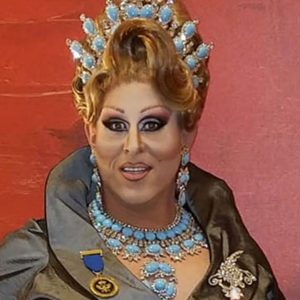 Jake Bradley-Rowe hails from a small ranching town in Northern California. He is the 6th generation to raise cattle and sheep in Grass Valley, CA. At the young age of 6 years old, he began showing sheep and cattle across the United States in some of the biggest livestock shows. He was an outstanding 4-H and FFA member for most of his childhood. He was honored as an Emerald Star in the 4-H, an American Farmer Degree recipient in the FFA and a State FFA Officer. In 1999, he was named Shepard of the Year from the American Sheep Association. While attending college at the University of London, Kings College he got his first taste of drag queens at a gay bar in the West End of London. Upon return to the United States, Precious Cargo was born as a result of a Halloween costume.

Precious Cargo was elected as the 35th Empress of the Court of the Great Northwest Imperial Empire (CGNIE). She is the youngest Empress to be elected to CGNIE.

Before becoming Empress, she was Miss Gay Sacramento. Precious is well respected in our local community and the International Court System as a leader and problem solver. She currently holds the office of Treasurer on the CGNIE Board of Directors.

Precious Cargo has been active in the Sacramento LGBT and HIV community for 15 years. She spent many years as the Vice President of the Sacramento Gay and Lesbian Center, Sacramento Pride Board of Directors, and the Cares HIV Community Clinic Gay Men’s Health Committee. She was also a past member of the NorCal AIDS Cycle Board of Directors. He is also an active member of Momma’s Family. Outside of the LGBT community, she has been actively involved as a board member of the Friends of the California State Fair, the National FFA Foundation, and the Cultivating Change Foundation to name a few.

Professionally, Jake works as a Director of Project Development for TESLA. Before joining TESLA, he was the Executive Event Planner at the California State Fair. He has owned his own event planning company, Royal Events for the last 12 years. Jake is well respected in the events arena of Sacramento. He is a nationally Certified Meeting Planner and Certified Fund Raising Executive. He resides in Sacramento, CA with his husband where is has a part-time costume and seamstress company, J Matthew Designs.

Jake is honored to be joining this distinguished group of individuals to serve the Court System and Queen Mother, Nicole the Great as an Heir Apparent.