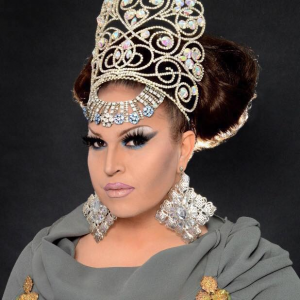 Landa Lakes was honored to be elected Grand Duchess 36 of San Francisco in 2008 and since that time as served on the board as President of the Board, VP of Membership Affairs/Chancellor of Protocol, and Ball Chair. In 2014, Landa started the Mentorship Committee that helps newly titled individuals better understand their role in the court and how to expand their service. In 2009, Landa created an annual pageant title of Miss California Gold that brings in all aspects of performance for one event. Landa looks forward to the future of the ICC and believes that work we do can help lives.

Landa Lakes began her life in the activist community from her involvement in the Gay and Lesbian Alliance, ActUp Oklahoma and the American Indian Student Association at the University of Oklahoma (OU). She has serviced both the LBGT community and the Native American community in various capacities. She was Chairperson for the Bay Area American Indian Two-Spirits for six years, served on the board of the Native American AIDS Project, Chickasaw Hika Council and the Human Rights Committee of San Francisco. She has received the many honors over the years for her hard work in the community from being awarded Local Hero by KQED to being nominated as a community Grand Marshall for San Francisco Pride, but above all this is very proud to be one of the founders of the annual Two-Spirit Powwow that embraces all communities.