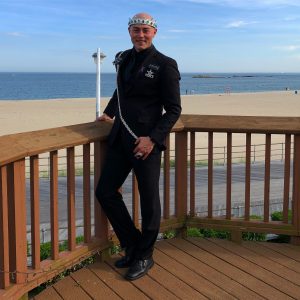 Born and raised in Plainfield CT, a small town 10 miles from RI,  I worked as a firefighter and EMT for my local volunteer agencies. Soon after  I became a full time EMT for my town and a Volunteer Medical Leutenant for the Plainfield Fire Department and have worked within my community for the past 11 years. Although I worked within my community and served as a public servant, I found myself looking for something new, something where I felt like I belonged. Soon after that, I guess you could say that the Imperial Court System found me. I met Gingah Rale and Edwina Typhoon  in March at Gingah's Unofficial Candidacy Party. I joined The Imperial Court of RI just 6 short weeks before Coronation 25. I found more than just friends, I found a family. I found an Organization that gave me my passion back and  found great role models that soon after became my family. Although I joined the court as a lady, Gingah quickly realized that I had more to offer as a male line member and the change was made. That’s where my journey began, serving as Aide de Camp to Empress 15 an 25 Gingah Rale. I was honored to become Imperial Crown Prince to our current reign, serving Emperor 26, Tom B Lovely Austenson ,  and also recieved the International Royal Order of Emperor 1 Gregg Lucio. I have served on the Board of Directors as a Member at Large and currently serve as the Board Parliamentarian for the Imperial Court of RI. Although my time with the ICS has been short, I have a love and deep desire to serve my community and The Imperial Court System in anyway that I can. My hope is that I can make a difference within my community and The Imperial Court System and The ICC. This amazing organization has given me a voice and an opportunity to truly make a difference.

It is an honor to serve Her Majesty Queen Mother 1 of the America’s Nicole the Great as a member of the ICC. I am absolutely honored with this opportunity and plan to learn and grow as much as I possibly can, building life long friendships and seeing our great organization grow and thrive.