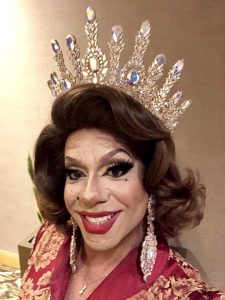 Savannah is no stranger to heels or to charity. She started her drag journey in college and has never looked back. A native of Massachusetts, she grew up in a home where helping others and showing love to the ones that you love was of the utmost importance. This has been a driving force in her life and something that has led her to the ICS.
Savannah grew up in small New England town USA where being anything but the status quo was frowned upon. But she was blessed to be born into a family that accepted you as you were and celebrated you for what you could do. This support and love early on helped to forge her strength and character and it has led her through some massive struggles.
As a young queen, Savannah performed in shows all around. Once that lost its luster for her, she turned her gaze towards the Court, wanting to do more than grab a few dollars for herself from the crowd. She joined the Imperial Court of Rhode Island at Providence in 2007 and instantly found her home and her calling. During her years with the ICRI, she has served on many Executive Boards, has been an ICP twice, and was an elected Empress. She had to step away, self imposed, from the crown due to personal conflicts of her own with addiction issues. But it has never stopped her from wanting to help nor has it kept her away from the ICS.
Now at six years sober and ready to rattle the stars again, she can’t wait to see what this next chapter has in store for her. She is so grateful to the universe for placing the ICS in her sights and onto her path. This journey has given her some of the best friends of her life. It has taught her who she is and how strong she is, and it continues to make her marvel at the power of people coming together for the greater good. Her grandmother, the driving force in her life, always said this: leave the world a little better than how you found it”. And she will never stop doing just that.