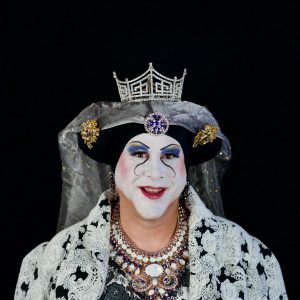 As a San Francisco Bay Area native I have been active in the queer community since my youth. I co-founded a queer youth group that attended the March on Washington in the 90s. This lead to many years working on local political campaigns in the suburbs of San Francisco. During that time I was also a member of the Zeta chapter of Delta Lambda Phi a national gay, bisexual and progressive men's fraternity. I became a member of the Golden State Gay Rodeo Association (GSGRA) and competed in rodeos around the nation until I injured my back riding a bull. I was crowned Miss GSGRA BAC 2003 & later Miss GSGRA 2004. In the San Francisco Bay Area, GSGRA and the The Imperial Council of San Francisco, Inc. share a rich history and continue to partner together to raise funds for local charities.

I later found my calling as one of The Sisters of Perpetual Indulgence, Inc. which has orders through out the world. I have served the San Francisco order as Treasurer, Board Member and for the last three years as Abbess. One of my most cherished memories as a sister was participating in Absolute Empress I, The Widow Norton José's 90th birthday celebration and hearing her laugh as we blessed both her and the event. I was proud to be the first Sister elected to the board of the Imperial Council of San Francisco. Being on their board allowed me to share the joy and excitement the reigning monarchs had for the court system and their communities. That led me to run for Royal Grand Duchess of Alameda and Contra Costa Counties so that I could support the East Bay community which I proudly call home.