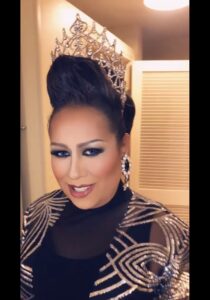 I am Dominique Toya aka Dominique Toya-Bouvier Whitney is a Native American Trans Woman and fifth generation of potters in her family from Jemez Pueblo, New Mexico. I am very well know for her beautiful pottery and is published in many magazines and books about her work.

I have been doing drag and performing for charity for over 20 years and have been highly involved with the local court which is now called Imperial Sovereign Court of New Mexico. I was crowned Empress 10 and dubbed the first full blooded Native American Empress of the International Court System by Mother Jose. I have served on the United Court of the Sandias board,  former name of our court and I have served on the board of SWAIA, which produces the largest Native American art show in the world held in Santa Fe, New Mexico. I am currently serving on the board of the Albuquerque Social Club, which is the home bar of the ISCNM. I am also currently the out of state Queen Mother to Emperor Whitney and Empress Alexis Nicole Whitney of Houston. I have traveled to many out of state coronations over the years to support other courts and to visit old friends and make new ones.

I truly believe in the International Court System and along with my mom, Maxine Toya, who everybody calls Mama Toya, have been involved heavily for over 20 years.  Both my mother and I have donated our pottery for fundraisers for the court and we have donated our time over the years. We are both proud to be a part of this great family!!!

In closing I would like to thank my Sister, Esmeralda Kanye-James, Empress of San Antonio and Heir Apparent, for even thinking to nominate me which I am very honored and humbled. I know I can help make a difference, especially being the first full blooded Native American Trans Woman to sit on the International Court Council. Thank you so much for your consideration.

Respectfully and With All My Love,