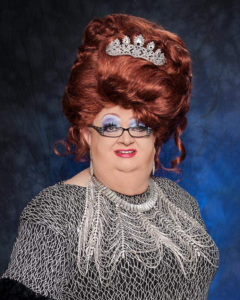 Is a resident pf Conyers Georgia since 2013. I was very involved in the Leather community during my nearly 20 years in Washington DC.  Within the Leather Community I became known as MamaBear.  In 2008 I formed a 501 C 3 organization for LGBT causes and named it MamaBear Charities, Inc.After becoming a member of the Gay Men’s Chorus of Washington DC the drag persona Sister Penne Kostal was born.

Ms Kostal performed with GMCW a couple of times and many times at clubs in and around Washington DC.

After a move to Atlanta I became a member of The Atlanta Sisters Of Perpetual Indulgence, and served one year as Abbess for the House. In 2018 I purchased a restaurant  in Atlanta and due to the business left the Sisters. The restaurant closed this past year due to the Pandemic and was not able to reopen.

Being retired now I found that the Crown Magnolia Court of Georgia  was being founded and was privileged to be ask to serve on the developing Board of Directors. And thus Sister Penne Kostal became LadyP.