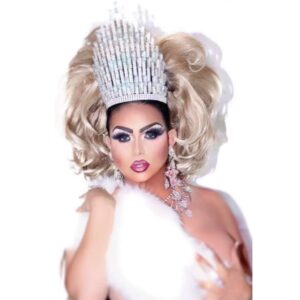 My name is Josh Garcia also known as Seliah Deleon. I am Imperial Emperor XX the youngest Elected Emperor of New Mexico also the Imperial Empress XXIII the first community New Mexico elected Empress.
I have been involved with the Imperial Sovereign Court of New Mexico (ISCNM) for the last ten years. Throughout that time, I have held many positions and titles with the court. I have been on the line, held court pageant titles, served as Board President and board Treasure. I was elected Emperor XX and Empress XXIII. I am also Queen Mother Ill of all New Mexico. Throughout my time with the court, I have helped rewrite our bylaws, come up with policies and procedures.
In my daytime job, I am the HIV Program Manager with Planned Parenthood of the Rocky Mountains. The programs that I overlook are our Teen'MPower and MPower programs. Both programs work with a member with the LBGTQ+ on HIV/STI Prevention and are peer lead programs on the sex that they are about to have or currently having. I also overlook our HIV testing, PrEP, and PeP service as well. I also have a background in Hospitality working from any Hotels and venues planning events. I have also worked for the City of Albuquerque in the Finance department working with many departments on establishing a budget and presenting them to our City Council for approval.
I am also a board member for the Albuquerque Social Club which is a 501c7 and one of the oldest clubs here in New Mexico. Well, during my time on the board I have helped them rewrite their bylaws, come up with a Brand-identity Guideline and Style Guide. Also, assist with planning many of their events.
I believe that all the experience that I have held personally and personally will be beneficial to the International Court Council. I hope that you would consider me, and I look forward to hearing from you.