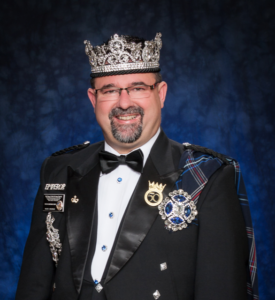 I am a native of Ohio and attended The Ohio University. During the week, my full time professional career is Vice President for a regional bank where I have worked for 30 plus years. I have also been involved in the community prior to joining the local Court Chapter. Other involvements include being involved in local Community Theatre serving as an actor, producer and on the board. I have also served on other boards along with being involved with the local area chamber events. I joined the Imperial Sovereign Queen City Court of the Buckeye Empire, all of Ohio (ISQCCBE) in 2011 and became immediately active and became Emperor 23 in 2014. In 2017, I stepped up again as Emperor 26 becoming the first twice elected Emperor of the ISQCCBE along with being partially responsible for raising well over $100,000 during the reign. During both of the reigns and my active time with the ISQCCBE I have been able to help raise money for many charities and the community. During both of the reigns, I was also able to become the Emperor of Rio de Tijuana helping to raise money to assist those in need in Tijuana. While being involved in the International Court System, I have had the pleasure and honor of visiting other Courts through the United States including Portland, San Diego, San Antonio, Buffalo, New York, Connecticut, Indiana, Lexington and Washington D.C. I look forward to traveling to other courts throughout the International Court System.
For pleasure, I enjoy traveling having traveled to Bermuda, Germany, Italy and several times to France along with most every state east of the Mississippi and several states west along
with several cruises to the Caribbean.